Last week, video footage was released by FUNAI (Brazil’s National Indian Foundation) of a tribe living in voluntary isolation, possibly since the Amazon rubber boom of the late 1800’s, perhaps much longer, emerging recently from the jungle near the Peruvian border. Speaking a language from the Panoan linguistic family, interpreters brought in by FUNAI were able to communicate with the group of three young men. Transcripts of the reported conversation are chilling. Many from their tribe, including most, if not all of their leaders, were killed recently by drug traffickers and loggers intruding in their traditional (and supposedly protected) land just… Continue reading

Tribal Christians across the Amazon and lowlands of South America face unique challenges. Radically changing social and political environments means that the need to organize and work together is greater than ever. Much of today was spent with key tribal leaders from several countries working out the realities and practicalities of creating an internationally-recognized, entirely-indigenous led network across 11 countries through which tribal Christians can effectively mobilize and complete the Great Commission in this region. These meetings will intensify over the days ahead as we move to a new location and as more tribal leaders join in. Please be in… Continue reading 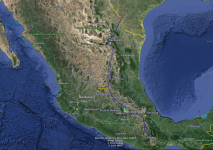 Quick update: Megan has been in Florida the past couple of weeks searching for a doctor to deliver our baby there. Drake has meanwhile been finishing up work in Oaxaca while preparing to drive from Oaxaca to the States – where he can’t wait to see his wife again! Drake plans to make the 5-6 hour drive to Mexico City on Saturday. There he will meet his dad who’s flying in from Germany. From there they will make their way north towards the US border, which they plan to do over two days. Please pray for safety on the road… Continue reading

Dave and I will be working this week with Tarahumara Indian believers, teaching them methods for conducting field surveys and research into unreached people groups. Praise God, there is a growing missionary movement among the small Christian Tarahumara population, and we have the privilege to work with them! We board a bus tonight from Oaxaca that will get us into Mexico City by early Sunday morning. From there we fly to Chihuahua state, followed by another day of ground travel through the Copper Canyon wilderness. Please pray for these tribal believers, that God will impart wisdom through this training.  Pray that… Continue reading

The middle of August marks our 6-month anniversary working with Etnopedia in Mexico!  Your prayers and financial support continue to help us move forward and accomplish much with this ministry.  As indicated in our last post, we recently made a huge breakthrough in our research of Nepal’s ethnic people groups.  Having this information gathered in one location provides a common ground from which missionary movements in all languages from around the world can collaborate towards reaching the hundreds of nations within Nepal, many of whom still have no access to the Gospel message of Jesus Christ.  Very little is known… Continue reading

This week, after over several months of detailed research, I finished and uploaded to Etnopedia a complete list of Nepal’s known ethnic people groups. So what exactly is the significance of such a list and what effect will it have on the Evangelical missionary movement? Short answer: used to its full potential, it will lead to major advances in eventually reaching 450+ people groups who currently have little to no access to the Gospel. Etnopedia serves Evangelical missionary movements around the world by providing information on unreached ethnic people groups.  Armed with this information missionaries can focus their efforts where access… Continue reading