Equipping the tribal church of Colombia! 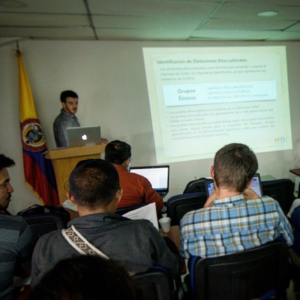 As written in Ephesians 4:12, we are called “to equip the saints for the work of ministry, for building up the body of Christ”. Empowerment is central to our work, and that includes equipping indigenous missionaries to do their own field research. Last month, Drake traveled to Bogota, Colombia, where he was invited by the tribal-led missionary movement of Colombia, RELIEC (Red de Lideres Indigenas Evangelicos de Colombia – Network of Evangelical Indigenous Leaders of Colombia), to train their missionaries through an intensive, two-day workshop. Following the training, he was also invited along with the rest of the ALTECO team to participate in a historic gathering of Colombia’s indigenous evangelical leaders hailing from tribal churches across the country. While Colombia has about 105 known tribes, many still do not have any access to the Gospel. In light of this, the event had a turnout of over 400 people from more than 30 different tribes! Indigenous leaders also came from neighboring Venezuela, Peru, Brazil, and Panama. An indigenous Christian gathering of such size and diversity has never before happened in Colombia. Such a movement of the Lord is an encouraging reminder as the Gospel breaks down historic barriers of darkness, hatred, and fear across an otherwise deeply troubled country.

As a follow up to Drake’s workshop, each student was assigned tribes to interview during the conference using a structured survey that was refined during the training. By the end of the week, our team had a stack of completed surveys with current information about each tribe to add to our database. Through interviews with indigenous leaders during the conference, Drake learned much about endemic levels of conflict and persecution in remote tribal communities. He also learned of nomadic tribes still roaming the jungle in complete isolation and fear, without access to the truth about the saving work of Jesus Christ. 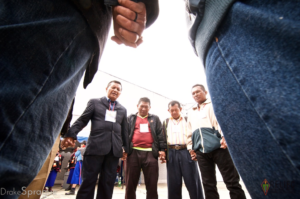 Of note, Colombia has suffered through nearly half a century of violence through its civil war and ongoing drug-related crime. Even after recent peace agreements, it remains the world’s second most heavily land-mined country after Afghanistan. Over 6 million people have been displaced internally within the country, seeking safety in larger towns and cities. Many of the displaced are indigenous people who have often otherwise been forced to take sides in the conflicts. Some of the indigenous pastors Drake met at the conference are from congregations of believers from specific tribes now living in the city. The urban aspect creates a different dynamic for tribal ministry not only in Colombia but in many countries where indigenous people have had no choice but to flee their traditional communities and seek refuge in the urban landscape.