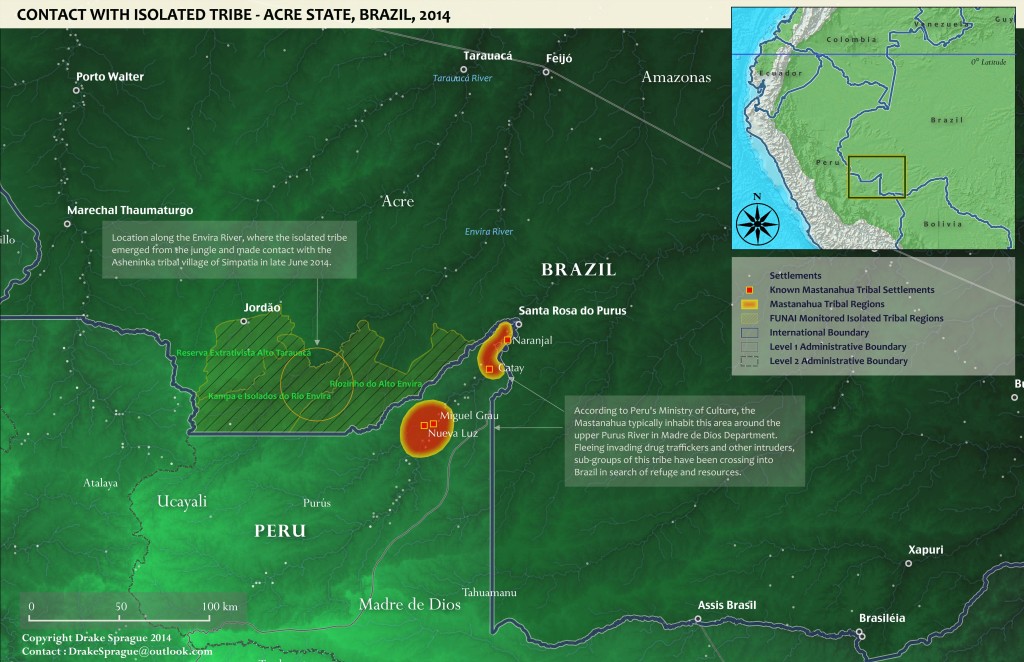 Last week, video footage was released by FUNAI (Brazil’s National Indian Foundation) of a tribe living in voluntary isolation, possibly since the Amazon rubber boom of the late 1800’s, perhaps much longer, emerging recently from the jungle near the Peruvian border. Speaking a language from the Panoan linguistic family, interpreters brought in by FUNAI were able to communicate with the group of three young men. Transcripts of the reported conversation are chilling. Many from their tribe, including most, if not all of their leaders, were killed recently by drug traffickers and loggers intruding in their traditional (and supposedly protected) land just across the border in Peru. Those that that weren’t shot died of disease, likely flu or diphtheria, contracted from the intruders. Isolated tribes such as these have few immunities to common illnesses. According to our own contacts in the area, these men were probably part of a sub-group of the Mastanahua tribe, which according to Peru’s Ministry of Culture numbered less than 80 people in 2007. Christian missionaries have in the past attempted with little progress to contact this tribe. What could have been a peaceful contact by missionaries who care for these people, not only as a unique culture but as human souls loved by God and in need of a relationship with Him, instead became a tragic, violent encounter. Efforts by secular anthropologists and many NGOs petitioning governments to seal off these known tribal areas to non-indigenous outsiders have only succeeded in keeping out law-abiding missionaries. Drug traffickers, illegal loggers, miners, poachers and corrupt governing officials do not respect the law. There are an estimated 60-70 uncontacted tribes across the Amazon region, at least four of whom are within close range of this recent contact. It is just a matter of time before the next group comes face to face with an increasingly shrinking outside world. When they do emerge, who will they encounter? Will they be met with the deadly blasts of shotguns or by people desiring to begin a genuine and respectful relationship with fellow humans who are lost apart from Jesus Christ?

Through our agency, ALTECO, we are training and equipping indigenous, tribal missionaries to minister to the spiritual and holistic needs of tribes such as these. Will you pray with us for these hidden tribes, and over how you too can partner with us in this urgent, critical work?

For reference, I created the attached map with details about these events, and included links to related news articles below: